Celebrity athletes, elaborate construction projects, political infighting – when you think about it the Olympic Games haven’t changed all that much since they first started in Ancient Greece. All the way from Olympia 776 BC to London 2012, the Olympics have always been about so much more than just sport. But back in Ancient Greece it was less about national pride and sponsorship revenue and more about worshipping the gods. Even the location of the first Games had a religious significance, as their site at Olympia on the southern Peloponnese Peninsula was a shrine to the Greek god Zeus. From the 8th century for the next 1000 years, Greeks would gather here from across the country for days of ceremonies, exhibitions and even ritual sacrifices as well as the actual sports events. Winning athletes were the superstars of their day – the closest a mortal could be to a god. Though if you wanted to take part you had to be freeborn, Greek, and a man – oh and also had to do it in the nude. So some things definitely have changed! 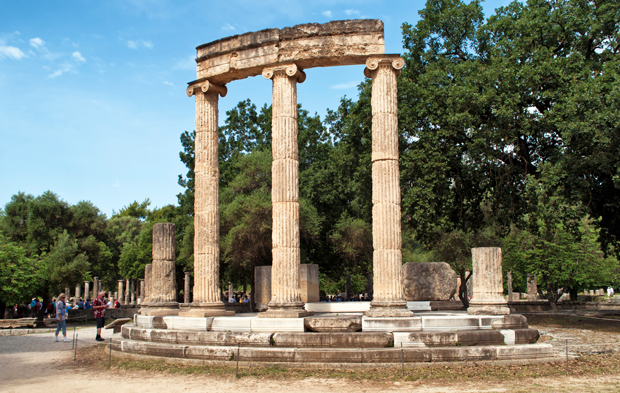 A reconstructed temple at the Olympia archaeological site

The Games took place every four years, and to let people know when they were coming, priests were sent out across the county to spread the word. So they could travel in peace they carried two signs, an olive branch and a flaming lantern. These original Olympic torches were lit with the sacred flame from the Temple of Zeus – and also pretty handy for finding your way. For three months around the Games an ‘Olympic Truce’ was declared and wars were stopped, so people could travel and worship safely. And a lot of the time disputes got settled peacefully when the opposing sides met up at the Games. 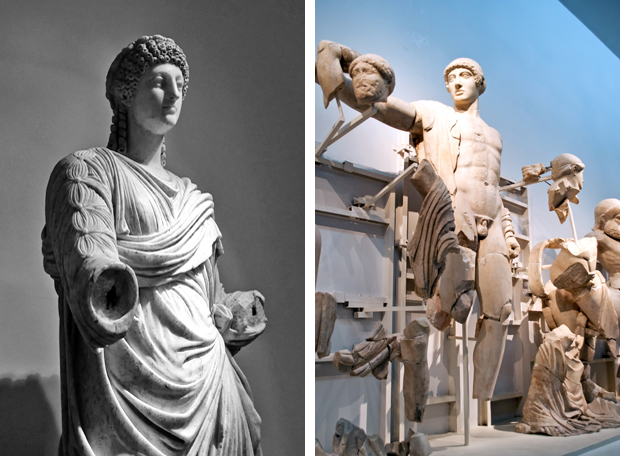 The Olympic site was a whole self-contained town, with its own temples, accommodation block, bathhouses and public buildings. Sort of like the athletes’ village of today’s Olympics. Except that the heart of it then was The Temple of Zeus. This was Olympia’s most important buildings and housed one of the seven wonders of the ancient world. The Statue of Zeus was a giant, 13-metre-high, gold and ivory statue of Zeus on his throne. It’s long gone now and there’s not much left of the temple either, but one column was reconstructed for the 2004 Athens Olympics to give a sense of its size. The ruins across the site have been heavily damaged so you have to use your imagination as you walk through piles of stone and crumbling pillars scattered amongst the olive trees to see them as a temple or gymnasium. The best-preserved statues, carvings and relics from the site are on show in the archaeological museum next door.

The gateway to the stadium

Away from the backstage areas, the focus of the Olympic site was the stadium. The one you can see now was built in the 5th century BC, though underneath it are remains of older stadiums right back to the original. It’s not what you’d think of as a stadium today, but more like a field with a dirt rectangle in the centre. But it could hold up to 45,000 spectators – a bit over half as many as the stadium for the London 2012 Olympics. Though it was a lot less comfortable as there were no seats so you just had to stand or sit on the ground. And I’d have had no chance of getting tickets as women weren’t allowed inside, the best you could get was watching from a nearby hill. The finish line of the 120 metres running track is still there, where visitors have a go at a sprint photo finish (the nearest I am ever likely to get to an Olympic track!).

Each Games had ten judges, selected by a lottery from a pool of wealthy men. They had a special paved area where they sat, though it’s not where you’d expect it to be – rather than on the finish line it’s in the middle of the stadium. Because in the original Olympics, it wasn’t about being the fastest or the strongest and coming first. All athletes who wanted to compete had to be in Olympia 30 days before the Games started. They trained, ate, slept and socialised together for all that time – and the judges were watching. As well as seeing how good they were at their sport, they were also judging their character. The word athlete even means “healthy mind, healthy body”. So how disciplined, fair and moral you were was just as important. And by the time it got to the day of the Games, the judges already knew who they wanted to win.

Being an Olympic champion was a huge honour to the Greeks – as it is to athletes now. Champions were seen as as being chosen by Zeus in front of their nation. So the judges had to make sure they picked the right person. And if you were found to be cheating then the punishment was impressively clever. Cheats had to pay a fine which was used to build a bronze statue of Zeus. These were lined up outside the stadium entrance and carved into the base was not only their name but also their father’s name and the village they were from. Practically the whole of Greece attended the Games and had to walk past these statues, so you’d shame your family and your village too. Plus they were also a handy reminder of the perils of cheating for the athletes as they filed into the stadium at the start of the events.

The original incarnation of the Olympic Games lasted until 393 AD, when Roman Emperor Theodosius I abolished them as part of his mission to introduce Christianity to Greece. Temples were ransacked and centuries of earthquakes and floods finished off what was left of Olympia. By the time the site was rediscovered in the 18th century it was covered in eight metres worth of silt and parts of the site are still being excavated. The modern Olympic Games started in Athens in 1896 and they’ve grown to be a huge global event. But there are still touches that take you back to the original Games – the Olympic flame that comes from Olympia’s Temple of Hera, the olive wreath motif that used to be the winner’s prize, the focus on sportsmanship and fair play. Pride, power and profit might have replaced Zeus as the gods of today’s Olympic Games, but their heart still lies in these ruins in a field in Greece.

Ruins among the olive trees

We visited Olympia on a Celebrity Cruises ‘Ancient Olympia and Archaeological Museum’ shore excursion from the port of Katakolon, around 25 miles away. If you want to do it independently there are shuttle buses from outside the port which take 40 minutes and cost around €8 pre-booked (though there were buses lined up outside the port offering lower prices when we visited if you’re happy to wing it). There’s also a train service between Katakolon and Olympia, running three times a day each way, taking 45 minutes and costing €10 return. A combined entry for the archaeological site and museum costs €9 per person.

I visited Olympia as part of a Celebrity Cruises Venice to Istanbul cruise. Many thanks to Celebrity for hosting my mum and I on the trip. All views and opinions are, as always, my own.