I’ve always loved train travel. There’s something mesmerising about watching the world go by through the window, whether you’re passing through wide open landscapes or catching flashes of people’s lives as you ride through town. I’ve travelled by train around the world, but one thing I’ve always wanted to do is an Interail trip around Europe, crossing countries as you travel by train from one city to the next. So this summer I’ll be doing a 10-day rail trip – the only problem is deciding where to go. I’ve been scouring the Voyages-SNCF website for destinations and routes, and am amazed by how all the options. Europe has so many scenic rail journeys that I could easily spend months seeing them all, but I’ve had to narrow them down. Here are my current favourites – hopefully at least a couple of which I’ll get to do this year.

Top of my wish list is the Flåm Railway – or Flåmsbana – in the Norwegian fjords. Running between Myrdal and Flåm, near Bergen, the route is only 20km long but it packs in a lot in that short distance. The Flåmsbana is one of the world’s steepest railway lines, an incredible piece of engineering considering it was built back in the 1920s. You start up at 863 metres above sea level in Myrdal and then pass by steep snow-capped mountains and roaring waterfalls as you travel through twisting tunnels. The journey ends up at sea level in Flåm, with its red buildings among the green pastures on the banks of the Sognefjord.

I could probably write a whole wish-list just of Switzerland’s scenic rail lines. For a comparatively small country it has more than its share of spectacular train journeys. Top of the list for me are the Glacier Express and Bernina Express. Both travel through the Alps so have plenty of snowy mountain scenery. The Glacier Express runs between the ski resorts of St Moritz and Zermatt, taking 7.5 hours and climbing up to the 2033-metre-high Oberalp Pass. The Bernina Express (which travels at about 20 mph so it’s a bit of a misnomer) travels from Chur via 200 bridges and 55 tunnels to Tirano on the Italian border.

In a corner of south-western Germany, the Schwarzwaldbahn or Black Forest Railway runs alongside thick conifer forests, lakes and ruined castles on its journey between the towns of Offenburg to Singen. You pass by villages that look like something from the pages of Hanzel and Gretal – appropriately enough as the Brothers Grimm set their stories here. The railway runs for 93 miles, travelling 600 metres up on the way by doubling back on itself through tunnels and viaducts. From the terminus at Singen you can then join the Upper Rhine Railway and follow the river down to the shores of Lake Constance.

Perched precariously on the cliffs of the Northern Italian coast are the five villages that make up the Cinque Terre or ‘five lands’ – Riomaggiore, Manarola, Corniglia, Vernazza and Monterosso. These pretty pastel-coloured fishing villages sprawl from the waters edge right up into the hills behind, using every scrap of available space. There are no cars allowed in the Cinque Terre but walking paths run through the hills above the villages, or if that’s too energetic then you can take the train. From La Spezia regional trains run along the coast, passing through tunnels with flashes of the sea visible between them.

My final choice is a bit closer to home – the West Highland Line in Scotland. Voted the world’s best railway journey, this 164 mile route runs between Glasgow and Mallaig in the Scottish Highlands. It starts off by following the banks of Loch Lomond and runs past the base of Ben Nevis, over the moors and across the Glenfinnan Viaduct (which might look familiar from the Harry Potter films). To make it even more scenic you can travel by steam train in the summer. Known as the Jacobite, the train travels between Fort William and Mallaig, where you can catch the ferry over to the Isle of Skye. 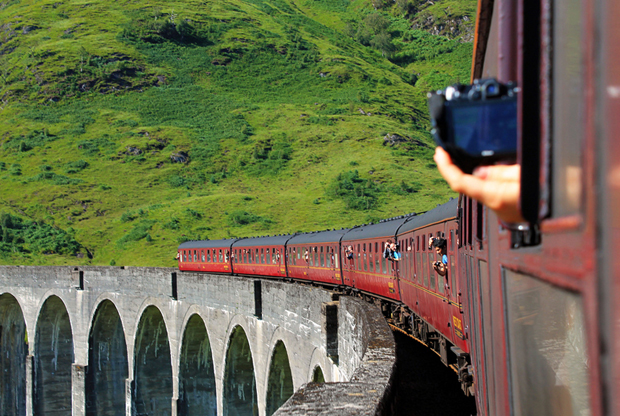 So that’s my European train travel wish list – which journeys would make it onto yours?

This post is brought to you with the assistance of Voyages-SNCF.