With colourful fishing boats tucked in the harbour, surrounded by a crescent-shaped bay of golden sand, seagulls swooping overhead and the smell of freshly cooked fish and chips, St Ives is your classic Cornish seaside town. Not that long ago it was dependent on fishing, but now tourism is the biggest draw, with visitors lured in by the stunning beaches, pretty cobbled alleyways, fresh seafood and artistic reputation. It doesn’t hurt that this is one of the warmest parts of the UK too, with the passing Gulf Stream giving it a mild climate and warm winters. And the off-season is one of the best times to visit, when the crowds go home and St Ives reverts back to its sleepy, relaxed state and you can almost have a beach to yourself.

Fishing boats in the harbour at St Ives

The artistic reputation attached to St Ives goes back to the 1920s, when a group of potters and artists settled in the town, pulled in by the scenery and the clear light in this part of the world. Both of which are still attracting artists now, and you’ll usually see a few painters sitting along the seafront. Heading back from the harbour, narrow cobbled lanes lead you past cafes and little shops selling handmade jewellery, clothes and crafts. Here also is the area called the ‘downalong’, with old granite fisherman’s cottages – mostly refurbished as holiday cottages now and decorated with colourful hanging baskets. 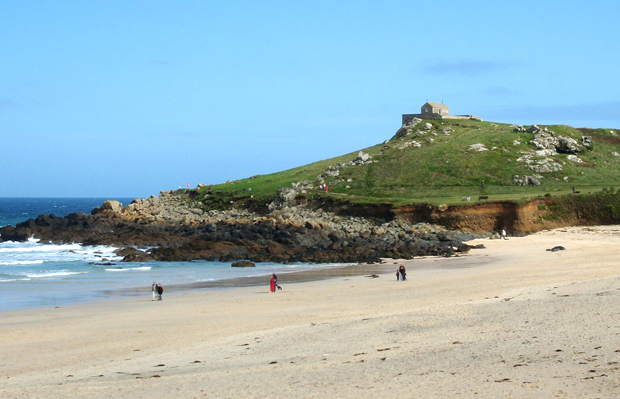 Porthmeur beach, overlooked by the chapel of St Nicholas

St Ives displays its arty credentials with a couple of major museums for such a small town. First is the Cornish outpost of London’s Tate Gallery – Tate St Ives. The building is a converted gas works looking over Portmeor Beach, which has been turned into a gallery space showing modern art from mostly British artists. The second is the Barbara Hepworth Museum and Sculpture Garden. It was opened after her death on 1975 and shows off her sculptures in the studio, house and gardens where she lived. If you want to pick up your own bit of St Ives art, there are studios and galleries around the town, and more are open for talks and workshops as part of the annual September Festival (13–27 September in 2014).

There are four main beaches in St Ives, surrounding the peninsula on all sides. The most popular is Porthmeor beach. It’s surrounded by rocky headlands and is the most rugged and exposed, making it good for surfing. Overlooked it to the east is the tiny chapel of St Nicholas, dedicated to fishermen and used as a lookout for smugglers in the 18th century. Around the headland is Porthgwidden beach, a small sheltered cove flanked by beach huts, and the harbour beach. Then last is Porthminster Bay, more sheltered and with the longest and widest area of sand. From there you can follow the South West Coast Path around the next headland and on to Carbis Bay and beyond. Carbis Bay is about a mile away and has a huge stretch of sand, and a train station where you can get the train back to St Ives.

Getting there… St Ives is at the far south-west tip of England and easy to get to by train, if not very quick – trains from London take six hours, with and advance single tickets from £32. It’s worth it for the views though, with the last part of the route running right along the edge of the coast. Or there’s the overnight Night Riviera Sleeper train, which runs from London to Cornwall every day except Saturday and costs from £93 each way for two sharing a cabin. The nearest airport is in Newquay, 30 miles away, with flights from around the UK plus a few European destinations in summer. It’s hard to park in St Ives so you’re best off without a car.

Sleeping… St Ives is full of B&Bs, from the traditional to the quirky. The bizarrely named Organic Panda is more at the quirky, arty end of the spectrum, with its own art gallery, driftwood furniture and organic linen and toiletries. There’s a panoramic view across the bay and amazing breakfasts, with local produce and bread baked by the owner. The three rooms cost £80–£140 a night B&B. Or if you’re staying longer, The Sail Lofts have self-catering apartments which sleep two–seven people. They are right by the harbour, with their own spa and light airy rooms. Off season there are some good deals to be had, with a two-person apartment at £299 a week, but in July the largest apartment is a huge £2600 a week.

Eating and drinking… In a gorgeous spot right on the beach at Porthminster Bay is the Portminster Beach Cafe. They specialise in Mediterranean and Asian-style seafood dishes, and have a terrace outside where you can soak up the views (with patio heaters if the weather isn’t behaving). You need to book in the summer but off-season they’ll happily let you while away the afternoon on the terrace with a coffee or glass of wine. Another lovely seafront drinks spot is the Porthmeor Beach Cafe, which looks out over the other side of the bay and is a great place to try a Cornish cream tea. And for local seafood, with fish from St Ives Bay, the Seafood Cafe lets you customise your own dish – choose from a range of fish and seafood, then pick your accompaniment and sauce to go with it.