Famous for Georgian terraces, thermal spa waters, cream teas and Jane Austen, you can’t say Bath isn’t on the UK tourist trail. Its quintessentially English charms pull in visitors from around the world and it’s got so many historic buildings that the entire city has been made a UNESCO World Heritage Site. But although you might have to dodge a few tour groups on a visit to the city, its still more than worth it. Bath is set on seven hills and perfect for a bit of aimless wandering, where you’re likely to come across a hidden park, café or viewpoint away from the crowds for a minute and soak up the history and scenery around you. It’s a great weekend spot whether you’re a history and architecture buff, more interested in boutique hotels, spa treatments and designer shops, or just want to stuff yourself on tea and cake.

Bath’s Royal Crescent is one of the city’s most iconic sights – a curving terrace of Georgian townhouses arcing around a perfectly manicured lawn. Built in the 1770s, they haven’t changed much since then, on the outside at least. Most are private residences, when they’re not being used by film crews for period dramas, but Number 1 Royal Crescent has been turned into as a museum. You can go back in time to the 18th century inside and see how the Georgians lived, complete with authentic furniture and decoration. The Royal Crescent is one of the many buildings made from the distinctive honey-coloured Bath Stone. Quarried out from the hills around the city, it’s a form of limestone that was first used by the Romans and later for churches, bridges and houses around Bath. If you want to find out more about the Crescent and the city’s other historic buildings, the Mayor of Bath’s guides run a two-hour free walking tour. Tours run every day at 10.30am and 2pm (except Saturdays) and the two-mile circuit takes in Bath Abbey, the Roman Baths, Assembly Rooms and Pump Rooms among others. 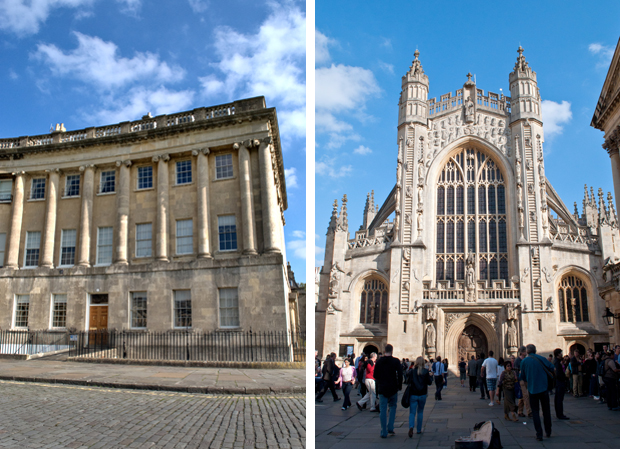 No 1 Royal Crescent and Bath Abbey

Another famous city landmark is the covered Pulteney Bridge. It was built for William Pulteney to connect Bath to land on the other side of the River Avon to drive up land prices. It’s one of few bridges to have shops built into it and still has a well-preserved facade, though the back is a bit more DIY as extra windows and extensions have been added over the years. A good way to get a closer look at the bridge is with a boat trip, which sails beneath it and along the Avon out of the city. Within minutes you leave Bath behind and are surrounded by fields and trees, before ending up at Bathampton Mill. The trips run between April and October, with the return journey taking about an hour and costing £8 for adults.

Bath has long been famous as a spa – it’s even in the name – and some of the warmest geothermal springs in the UK have been attracting spa-goers since the Romans. You can see how they did it back then in the city’s Roman Baths, where Roman visitors alternated between the caldarium (hot bath), tepidarium (warm bath) and frigidarium (cold bath). You can look round the site but I don’t recommend trying the pools yourself now. If the bright green colour of the water doesn’t put you off, then the tales of bacteria and radioactivity from the lead pipes might. If you want to take the waters yourself, a better bet is the Thermae Bath Spa. Opened in 2006, way over time and over budget, this huge spa complex sits in a modern glass building near the old Roman Baths. The spring water are put to use in the Minerva thermal baths on the ground floor, and there are circular glass steam rooms and a wide range of spa treatments available. But the star attraction is the rooftop pool, where you can soak in steaming, mineral-rich water while getting a spectacular view of the Abbey and across the whole city of Bath.

Getting there… Bath is in the south-west of England and easy to get to from around the UK by train – it’s around 1.5 hours from London, and you can get advance tickets from £9.50 each way. If you’re travelling from further afield, the nearest airport is Bristol, where airlines like Easyjet, Ryanair and Flybe fly to mostly European destinations. Once you get to Bath, the city centre is fairly small and it’s easy to get around on foot.

Sleeping… You can stay in the city’s most desirable address at the Royal Crescent Hotel, where the two Georgian houses in the centre of the Crescent have been merged to form a five-star hotel and spa. It’s a little bit faded glamour, but more than makes up for it with period features, a hidden garden and stunning views. Double rooms from around £200 a night. Or for a more budget friendly stay, Bath University rents out rooms in its student residences, with double, twin and single rooms complete with TV and en suite bathrooms from £50 throughout the year. There’s more availability in summer when the students are away, when you can bag a single room with communal bathroom from £21. The campus is a miles or so from the town centre but there are plenty of buses between the two.

Eating and drinking… Tea at the Pump Rooms is a Bath institution. You can indulge yourself with a Champagne afternoon tea for £33, with scones and thick, buttery clotted cream, sandwiches and dainty cakes, all served in opulent splendour under the chandeliers. While you’re there, you can taste the hot spa water from the King’s Fountain. With 43 minerals it’s apparently a cure for all sorts of ills, though you do have to get past the not-so-appetising metallic taste. Or you can try a Bath tea-time classic at Sally Lunns, the oldest house in Bath. The ‘Sally Lunn bun’ is a kind of brioche whose recipe was allegedly brought over by a French emigrant in the 17th century. Today it’s served cut in half and spread with butter or cream.